Steve is an accomplished singer, songwriter and musician in his own right. Local rockers may remember Steve from the band “BARRAGE” who produced 3 hit CD’s in the 90’s. After his time on the road touring countless cities & states , Steve settled down with a family and started his own business, Stevens Kitchens. http://stevenskitchens.com

Steve has rocked the Central Florida area for years, from back in the days of The FBI, Fern Park Station and Janie Lane’s Sunset Strip to Orlando’s current hotspots such as Dexter’s of Lake Mary , Winter Park  & Cafe Murano’s

Steve took to the stage once again as the high energy front man for ICED DOWN. Steve’s powerhouse vocals and phenomenal stage presence kept Iced Down one of the most sought after acts in Orlando for six years. Iced Down  headlined Bike Week and Biketoberfest as well as opening for many national acts including, Cheap Trick, Eddie Money, CCR, Pat Travers, Warrant, Vince Neil, Spin Doctors and Huey Lewis. Steve  the lead singer of BLACK CANVAS, is  joined by former band mates, Tony Visconti & Jeff Bonenfant of Barrage & Kenny Smith from the days of Wanted , this group is poised to entertain the masses once again with their own particular style and sound. 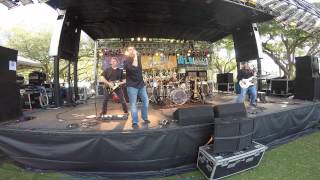 View from the road

Opening for Loverboy at DTFWF